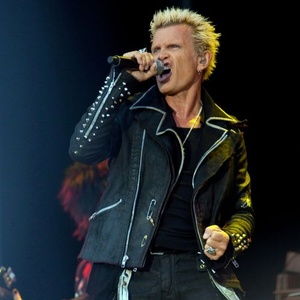 Upcoming events: 24
Subscribers:  25
My Rock Shows — search for concerts and buy tickets in more than 50 countries.
Join us
Sign in
Follow us on social media

Here you can find all upcoming Billy Idol concerts. If the concert schedule is not right, please contact us and we will add a gig of Billy Idol in 2022 or 2023 in our database.

Click the "Subscribe" button and get notified by MyRockShows about Billy Idol upcoming events. Explore this page to find details of upcoming events of Billy Idol, including the venue address and tickets cost.

William Michael Albert Broad (born 30 November 1955), known professionally as Billy Idol, is an English musician, singer, songwriter, and actor. He first achieved fame in the 1970s as a member of the punk rock band Generation X. Subsequently, he embarked on a solo career which led to international recognition and made Idol one of the lead artists during the MTV-driven "Second British Invasion" in the United States.
Idol began his career in late 1975 as a guitarist in the punk rock band Chelsea. However, he soon left the group and along with his bandmate Tony James formed Generation X with Idol being the lead singer. The band achieved success in the United Kingdom and released three albums on Chrysalis Records before disbanding. In 1981, Idol moved to New York City to pursue his solo career in collaboration with guitarist Steve Stevens. His debut studio album Billy Idol (1982) was a commercial success and with music videos for singles "Dancing with Myself" and "White Wedding" Idol soon became a staple of then newly established MTV.
His second studio album Rebel Yell (1983) was a major commercial success with hit singles "Rebel Yell" and "Eyes Without a Face". The album was certified double platinum by the Recording Industry Association of America (RIAA) for shipment of two million copies across the United States. He followed with a number of successful albums, including Whiplash Smile (1986), Charmed Life (1990) and the concept album Cyberpunk (1993). Idol spent the second half of the 1990s out of the public eye focusing on his personal life. He made a musical comeback with the release of Devil's Playground (2005) and again with Kings & Queens of the Underground (2014).

Joan Jett and the Blackhearts

Pop Rock
They are subscribed to this band