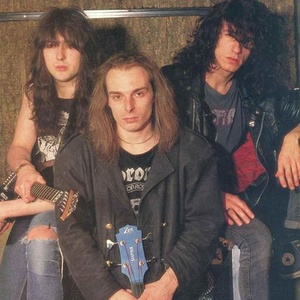 Upcoming events: 1
Subscribers:  4
My Rock Shows — search for concerts and buy tickets in more than 50 countries.
Join us
Sign in
Follow us on social media

Here you can find all upcoming Coroner concerts. If the concert schedule is not right, please contact us and we will add a gig of Coroner in 2022 or 2023 in our database.

Click the "Subscribe" button and get notified by MyRockShows about Coroner upcoming events. Explore this page to find details of upcoming events of Coroner, including the venue address and tickets cost.

Coroner is a Swiss thrash metal band from Zürich. They garnered relatively little attention outside of Europe. Formed in 1983, the band broke up in 1996, but reformed 14 years later. The band has performed at multiple live venues and festivals around the world since 2011, and plans to release a new album in 2017. Coroner's music combines elements of thrash, classical music, avant-garde music, progressive rock, jazz, and industrial metal with suitably gruff vocals. With their increasingly complex style of progressive rock-infused thrash, they have been called "the Rush of thrash metal". Coroner's sound then progressed and the production became more refined, resulting in the more progressive No More Color, Mental Vortex and Grin albums.

Speed Metal Thrash Metal
They are subscribed to this band in