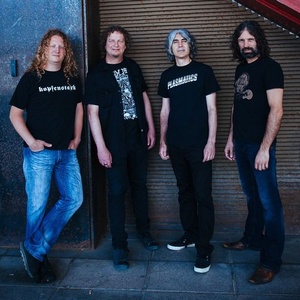 Upcoming events: 16
Subscribers:  4
My Rock Shows — search for concerts and buy tickets in more than 50 countries.
Join us
Sign in
Follow us on social media

Here you can find all upcoming Voivod concerts. If the concert schedule is not right, please contact us and we will add a gig of Voivod in 2022 or 2023 in our database.

Click the "Subscribe" button and get notified by MyRockShows about Voivod upcoming events. Explore this page to find details of upcoming events of Voivod, including the venue address and tickets cost.

Voivod is a Canadian thrash metal band from Jonquière, Quebec. The band consists of Denis "Snake" Bélanger (vocals), Daniel "Chewy" Mongrain (guitar), Dominique "Rocky" Laroche (bass) and Michel "Away" Langevin (drums). Their musical style has changed several times since the band's origin in the early 1980s. Starting out as a speed metal band, Voivod have added a mix of progressive metal and thrash metal to create their own unique metal style, and they are credited as one of the "big four" Canadian thrash metal bands, along with Sacrifice, Razor, and Annihilator.
Since its inception in 1982, Voivod have released thirteen studio albums, as well as one EP, one live album, two compilations, seven demos and one DVD featuring a live concert. The band found mainstream success in the late 1980s with their fifth studio album Nothingface (1989), which is Voivod's only album to enter the Billboard 200 charts, peaking at number 114. Voivod's most recent studio album, Target Earth, was released in 2013. The band won the "Visionary" award at the 2017 Progressive Music Awards.