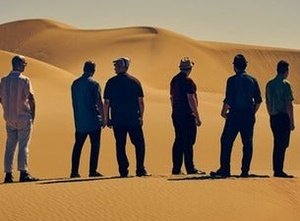 Concert of The Slackers in Patronaat

You have a great opportunity to see The Slackers, on Oct. 6, 2022 at Patronaat in Haarlem.

The Slackers are a New York City band, formed in Manhattan in 1991. The band's sound is a mix of ska, rocksteady, reggae, dub, soul, garage rock, and jazz. The Slackers' notability is credited to their prolific career, tours of North America, Europe, and elsewhere, and signing to notable punk label Hellcat Records.
There are several side projects of The Slackers, including Reggae Workers of the World, David Hillyard & The Rocksteady Seven, Crazy Baldhead Sound System, Da Whole Thing, the SKAndalous All Stars, as well as an acoustic solo project by Vic Ruggiero.

Zijlsingel 2, 2013 DN Haarlem, Netherlands
Haarlem, Netherlands
See all rock & metal events in Patronaat
You may also like
{"location":"City", "band":"Band name", "genre": "Genres", "place":"Place", "event":"Festivals in"}
{"message":"We use cookies to enhance your experience. By continuing to visit this site you agree to our use of cookies.","info":"More info", "link":"https://en.wikipedia.org/wiki/Cookie" }