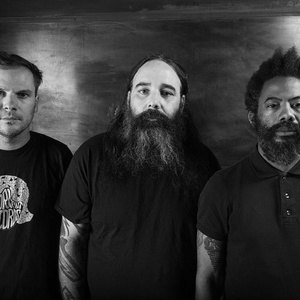 Concert of Om in La Poudrière

You have a great opportunity to see Om, on June 18, 2020 at La Poudrière in Belfort.

Om (sometimes stylized as OM) is an American heavy metal band from San Francisco, California. Formed as a duo in 2003 by the rhythm section of the band Sleep, OM is currently a trio.
Om's earliest works incorporate musical structures similar to Tibetan and Byzantine chant, as heard on the debut album Variations on a Theme. The band's name itself derives from the Hindu concept of Om, which refers to the natural vibration of the universe. Every album from Pilgrimage onward features Eastern Orthodox iconography in the cover art.
Om's first three albums feature Al Cisneros on vocals and bass and Chris Hakius on drums.
On December 5, 2007, Om performed in Jerusalem. Their performance lasted for over five hours and a portion of that show was released on 12" vinyl by Southern Lord as Live at Jerusalem.
The band's 2007 album Pilgrimage was chosen as Mojo Magazine's Underground Album of the Year.
On January 31, 2008, Chris Hakius left the band and was replaced by drummer Emil Amos of Grails. On the last tour with Hakius songs that would later become "Gebel Barkal" and "Thebes" were being performed live.
On August 15, 2008, Om released a 7" 45 entitled Gebel Barkal for Sub Pop's Singles Club. A live vinyl-only LP, Conference Live, followed in 2009 on Important Records.
Om's 4th full-length studio album, God is Good, was recorded by Steve Albini and released by Drag City on September 29, 2009.
The band's 5th studio album, Advaitic Songs, was released by Drag City on July 24, 2012. It met with critical acclaim.
In November 2013, the band played the final holiday camp edition of the world famous All Tomorrow's Parties festival in Camber Sands, England.

7 Avenue du Général Sarrail, 90000 Belfort, France
Belfort, France
See all rock & metal events in La Poudrière
You may also like
{"location":"City", "band":"Band name", "genre": "Genres", "place":"Place", "event":"Festivals in"}
{"message":"We use cookies to enhance your experience. By continuing to visit this site you agree to our use of cookies.","info":"More info", "link":"https://en.wikipedia.org/wiki/Cookie" }