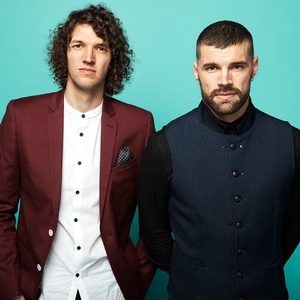 Concert for KING & COUNTRY in The Ballroom at Warehouse Live

You have a great opportunity to see for KING & COUNTRY, on Oct. 11, 2018 at The Ballroom at Warehouse Live in Houston, TX.

About artist for KING & COUNTRY

For King & Country, stylized as for KING & COUNTRY and formerly known as Joel & Luke as well as Austoville, is a Christian pop duo composed of Australian brothers Joel (born 5 June 1984) and Luke Smallbone (born 22 October 1986). The Nashville-based brothers' 2012 debut record Crave, has received praise, and the brothers were declared by Billboard as one of the "New Artists To Watch" for 2012. American Songwriter described them as "Australia's answer to Coldplay."
SUSIE Magazine raves, "It takes only one listen to the brothers' rich, upbeat, alternative sounds and thoughtful lyrics to understand their sudden popularity."
They describe their philosophy as such:
"The power of music can impact our mood, emotions, our day. But when you merge the strength of music with the heart, hope and passion of the Gospel... it has the ultimate power not only to change someone's day, but to impact them for eternity. This is why we write music and sing songs - we hope that people will be moved, encouraged and stirred to live a life for Someone greater than themselves."
They cite U2, Mutemath, OneRepublic, the Beatles, Goo Goo Dolls, and Switchfoot, as well as film scores such as those from Braveheart and Gladiator, as their musical influences.

The Ballroom at Warehouse Live