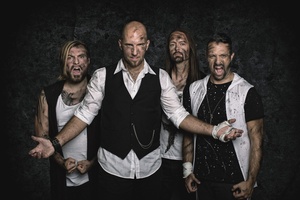 Serenity is an Austrian symphonic power metal band, which was originally formed back in 2001. However, it became a more stable group with a consistent line-up in 2004, when it also began using more progressive and power influences than earlier. They have defined their genre with more melodic and symphonic metal elements.
Most of their music focuses on important historical figures and events, including Sir Francis Drake, Marco Polo, Galileo, Beethoven, and Napoleon. They currently have produced five studio albums and two demos.
The members of Serenity have taken their talents outside of their music and have shared their interests and devotions with others. Vocalist Georg Neuhauser is a M.Sc. as both a geography and history teacher. He is currently in university to work on his doctoral thesis. Drummer Andreas Schipflinger is a research and development technician in the construction of cochlea implant system hearing aids. Bassist Fabio D'Amore is a sound engineer and studio manager, as well as a teacher for both the bass and music theory. He also fronts the metal band Mirrormaze, and has performed on tours with Xandria.
Former members Mario Hirzinger and Simon Holzknecht work as a nurse in a kidney dialysis center and a research and development technician in the optical and crystal manufacturing industry respectively. Thomas Buchberger, former lead guitarist, is an engineer of IT, marketing and PR and does web layout and design. He hopes to somehow continue collaborating in minor aspects with future Serenity albums.