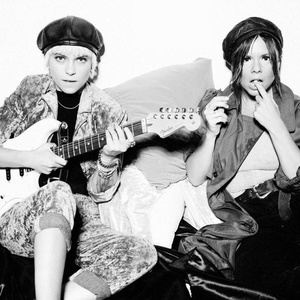 Here you can find all upcoming Bones (UK) concerts. If the concert schedule is not right, please contact us and we will add a gig of Bones (UK) in 2021 or 2022 in our database.

The duo met each other at the Blues Kitchen in their hometown and were in the all-girl band Fake Club from 2012 to 2014 before forming Bones UK later that year. They caught the attention of musician Jeff Beck early on in their career, who asked the band to cowrite his 2016 album, Loud Hailer, and to perform with him on tour. Since then, Bones UK relocated to Los Angeles, California.

The band have put out multiple singles independently before releasing their debut, self-titled album on July 12, 2019 via Sumerian Records. On it, produced by Filippo Cimatti, Bones UK confront everything from the "beauty industrial complex" to toxic masculinity, to sexism within the music scene, and also includes a cover of David Bowie's "I'm Afraid of Americans" after being asked by Howard Stern to record the song for a Bowie tribute album. Loudwire named the album one of the 50 best rock efforts of 2019.

Following the success of "Pretty Waste," the single became nominated for a Grammy Award for Best Rock Performance in November 2019. And in January 2020, Bones UK released an EP titled "Unplugged" and a short film of their performance online.[