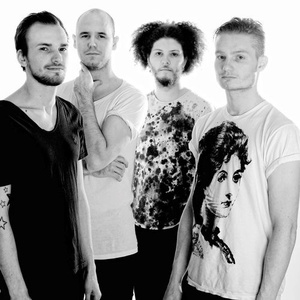 Here you can find all upcoming Agent Fresco concerts. If the concert schedule is not right, please contact us and we will add a gig of Agent Fresco in 2021 or 2022 in our database.

Please contact us in case you see a mistake in Agent Fresco events dates or if MyRockShows is leaving out any of Agent Fresco upcoming gigs.

Agent Fresco are an Icelandic band, combining pop, alternative, art, metal, and math-rock, formed in 2008 just weeks prior to competing in the Músíktilraunir (an Icelandic version of Battle of the Bands) which they won. They also won "best guitar", "best drumming" and "best bass playing". Their first release was EP Lightbulb Universe.
The lead singer is Arnór Dan Arnarson (previously with Rosa - the Danish progressive-rock act from Sorø). Vignir Rafn Hilmarsson plays the electric upright bass, Hrafnkell Örn Guðjónsson the drums and Þórarinn Guðnason the guitar and piano / keyboards.
In late 2010, Agent Fresco released their first full-length album, A Long Time Listening., Destrier followed, their second full-length album, in August 7, 2015.
Their sound is characterized as a cross between Mew and The Mars Volta.

Post-Hardcore Progressive Metal
They are subscribed to this band