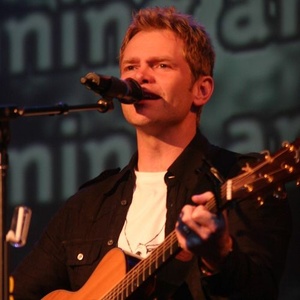 Upcoming events: 16
Subscribers:  3
My Rock Shows — search for concerts and buy tickets in more than 50 countries.
Join us
Sign in

Steven Curtis Chapman (born November 21, 1962) is an American Christian music singer, songwriter, record producer, actor, author, and social activist.
After starting his career in the late 1980s as a songwriter and performer of contemporary Christian music, Chapman has since been recognized as one of the most prolific singers in the genre, releasing over 20 albums. Chapman has also won five Grammy awards and 58 Gospel Music Association Dove Awards, more than any other artist in history. His seven "Artist of the Year" Dove Awards, his latest in 2009, are also an industry record. As of 2014, Chapman has sold more than 10 million albums and has 10 RIAA-certified Gold or Platinum albums.
Chapman is also a vocal advocate for adoption, along with his wife Mary Beth. Together, they have started a charity organization called Show Hope (formerly called Shaohannah's Hope), that mobilizes individuals and communities to care for orphans through its international orphan care work as well as adoption aid grants to help put more orphans from overseas and the U.S. in loving families. In 2009, Show Hope finished building Maria's Big House of Hope, a medical care center in China that provides holistic care to orphans with special needs. He is also a contributor to Compassionart, a charity founded by Martin Smith of British Christian band Delirious?.
Chapman was recognized in the Fall 2010 issue of Wood & Steel discussing the new Taylor 714 Signature Series guitar in honor of his youngest daughter Maria Sue. The guitar features the flower from Maria's picture and the word "SEE" on the 12th fret in Maria's handwriting. In 2003, Chapman starred in the Christian film Christmas Child.

Christian Rock Indie Rock
They are subscribed to this band