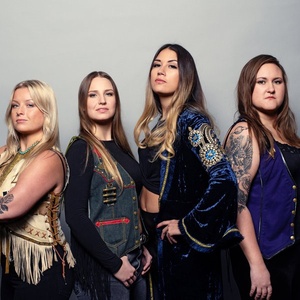 Upcoming events near: 32
Subscribers:  2
My Rock Shows — search for concerts and buy tickets in more than 50 countries.
Join us
Sign in
Follow us on social media

Here you can find all upcoming Thundermother concerts. If the concert schedule is not right, please contact us and we will add a gig of Thundermother in 2022 or 2023 in our database.

This is the same band that appears on the second half of the "Astral Navigations" CD from Holyground Records. Great material recorded in 1970 and 1971. Psychedelic freakouts with almost non-stop fuzzed out wah-wah guitar. Very appealing stuff.

There is also a Swedish all-female rock band that goes with the name Thundermother.

The interest surrounding Thundermother was born during the première at Gothenburg Rockfest in the spring of 2012 and it has escalated ever since. In May they completed a tour of Italy and during the summer they played at various locations throughout the country, from Jämtland to Skåne.

They filled the rockbars of Stockholm to the brim, and this fall they will be playing, as the first through history, unsigned band (without neither record nor record label) at the CLOSE-UP Boat with Turbonegro and Imperial State Electric.

World renown artist Danko Jones brought the band on the swedish tour as an opening act fall 2012. They performed at venues such as the Debaser Medis in Stockholm, Pustervik in Gothenburg and the legendary KB in Malmö before continuing to play with, among others, Bullet and the Scams. Thundermother love every gig from the MC show, pub show to the big venue.

Hard Rock Heavy Metal
They are subscribed to this band in