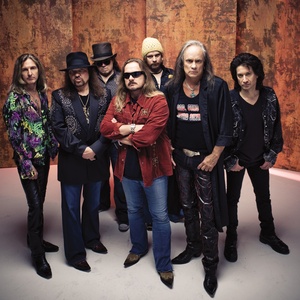 You have a great opportunity to see Lynyrd Skynyrd, on Dec. 1, 2022 at Hertz Arena in Estero, FL.

Lynyrd Skynyrd (/ˌlɛnərd ˈskɪnərd/ LEN-ərd SKIN-ərd) is an American rock band formed in Jacksonville, Florida, in 1964. The group was originally named My Backyard and comprised Ronnie Van Zant (lead vocalist), Gary Rossington (guitar), Allen Collins (guitar), Larry Junstrom (bass guitar) and Bob Burns (drums). The band spent five years touring small venues under a variety of different names and with several lineup changes before finally deciding on "Lynyrd Skynyrd" in 1969. The band released their first album in 1973, having settled on a lineup that included bassist Leon Wilkeson, keyboardist Billy Powell and guitarist Ed King. Burns would later be replaced by Artimus Pyle, and King by Steve Gaines. At the height of their fame during the 1970s, the band popularized the Southern rock genre with songs such as "Sweet Home Alabama" and "Free Bird".

The band abruptly ceased when Ronnie Van Zant, Steve Gaines, and backup singer Cassie Gaines were killed in an airplane crash on October 20, 1977, but reformed in 1987 for a reunion tour with Ronnie's brother, Johnny Van Zant, as its lead vocalist. Lynyrd Skynyrd continues to tour and record with co-founder Rossington (being the band's sole continuous member), Johnny Van Zant, and Rickey Medlocke, who first wrote and recorded with the band from 1971 to 1972 before his return in 1996. In January 2018, Lynyrd Skynyrd announced its farewell tour, and continue touring as of October 2019. Members are also working on their fifteenth album.

In 2004, Rolling Stone magazine ranked Lynyrd Skynyrd No. 95 on their list of the "100 Greatest Artists of All Time". Lynyrd Skynyrd was inducted into the Rock and Roll Hall of Fame on March 13, 2006. To date, the band has sold 28 million records in the United States.