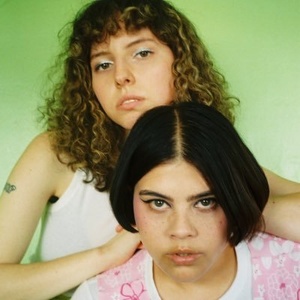 Concert of Sub*T in Union Hall

Sub*T is a band that was born in the mosh-pit. Tired of only being in the crowd, Jade Alcantara and Grace Bennett taught themselves how to play guitar in 2019 and started writing music together while on opposite ends of the country. Two years later, following the release of two self-produced singles, they unleashed their debut EP, “So Green” on November 19th, 2021, recorded in Nashville and produced by Alicia Bognanno of Bully. In the months since, they have played fun-filled shows at Baby's All Right, Elsewhere, and Union Pool in Brooklyn. Only one of them had a bubble machine malfunction.
Sub*T is all about what is happening, what is hurting, and what is *cough, cough* SUBTerranean. Inspired by the most raucous of the female-fronted 90s bands, they lunge towards SXSW in a fit of non-dude rock vengeance with an attitude too big to fit into a Spotify stream. They have received press from national outlets like Alternative Press and Atwood Magazine. More recently, they were featured on Matt Wilkinson’s Apple Music 1 show after receiving praise from Ellie Rowsell of Wolf Alice.
Since everyone asks: it’s pronounced SUB TEE. Now you know so never forget it.