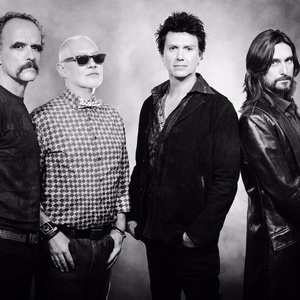 You have a great opportunity to see Caifanes, on March 26, 2022 at FEX Isla de las Estrellas in Mexicali.

Caifanes is a rock en español band from Mexico City. Formed in 1985, the group achieved international fame during the late 1980s and early 1990s. The original lineup consisted of Saúl Hernández (vocals & guitar), [[]] [es] Sabo Romo (bass guitar), Alfonso André [es] (drums), and Diego Herrera (keyboards and saxophone).Alejandro Marcovich later joined Caifanes as lead guitar player. Caifanes’ style can be described as a hybrid of British new wave, progressive rock and Latin percussion underscored by deep, somber, and Latin American-Mexican-Spanish-influenced lyrics and the vocal style of Saúl Hernández. Members of Caifanes have cited The Cure, The Beatles and King Crimson as major influences, with Adrian Belew having produced their third studio album, El Silencio, as well as making a guest appearance on it.

The name Caifanes is derived from 1940s Mexican pachuco (zoot suiter) slang "Cae fine". Its equivalent in English would be “cool dude.” The word has also been used to describe the proverbial Mexican pachuco, delinquent, or outsider.