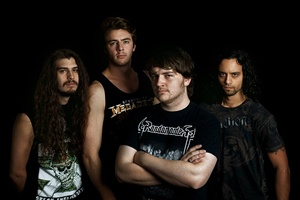 You have a great opportunity to see Harlott, on April 3, 2021 at Barwon Club Hotel in Geelong.

Forged in the Eastern suburbs of Melbourne, Australia, Harlott are the finest example of the thrash metal genre in recent years. Taking their influence from the 80's bay area thrash scene, and blending it with Teutonic melody and grit, they focus on high energy, up-tempo music with lyrical influences from war, religion, chaos and the human condition. Unrivaled live concerts, an aggressive recognizable sound, clinical musicianship, and a classic 'Aussie' sense of humour have earned Harlott a strong and dedicated fan base, which continues to grow day to day. Harlott's debut release 'Origin' blew audiences away with its unrelenting speed, ferocious sound, and hook driven riffs, and did much to solidify Harlott as an up and coming force to be reckoned with. The 4 piece thrash outfit followed with a national tour, a string of Australian Heavy Metal Festival performances and a handful of support positions, including Germany's ACCEPT and Megadeth's very own DAVE ELLEFSON. Their follow up release 'Proliferation' only proves that the band means business, and could not only match their own fury, but even surpass it. Harlott are hungry for the World, and in October 2015, they crushed Europe with Canada's Annihilator, the first step in what is to be a long and grueling career in total devastation! With big plans for 2016, including work commencing on a third album, numerous Australian shows and other good tidings in the pipeline, it is fast looking to be the biggest year yet for Harlott!! We like our music the same way we like our sex. Start slow, get faster, then get out of your hair in 30 seconds.

509 Moorabool St, South Geelong VIC 3220, Australia
Geelong, Australia
See all rock & metal events in Barwon Club Hotel
You may also like
{"location":"City", "band":"Band name", "genre": "Genres", "place":"Place", "event":"Festivals in"}
{"message":"We use cookies to enhance your experience. By continuing to visit this site you agree to our use of cookies.","info":"More info", "link":"https://en.wikipedia.org/wiki/Cookie" }