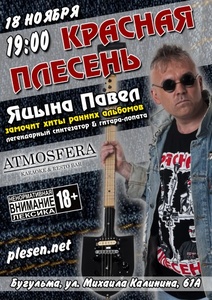 Concert of "Красная плесень" in Atmosfera

You have a great opportunity to see Красная плесень, on Nov. 18, 2022 at Atmosfera in Bugulma.

Krasnaya Plesen (Russian: Красная плесень, literally, red mold), is a Russian punk rock group based in Yalta, active from 1989 to this day and having released 55 full albums. The name of the band is a mockery on the term Krasnaya Presnya (Russian: Красная Пресня - Red Presnya). Presnya is a name of a neighbourhood in Moscow that saw uprisings during the Russian Revolution of 1905, and during the Soviet era was a popular name for factories and other organizations.

The group is known for its parodies of popular musical artists, especially from Russia, such as Ruki Vverh!, and the profane and racist language used in many of its songs.

Frequent characters in the group's songs include Russian political figures such as Leonid Brezhnev and Mikhail Gorbachev, as well as made-up characters like Cheburator (a portmanteau of Cheburashka and Terminator), the rural metalhead Balalaykin and Corporal Srul'.