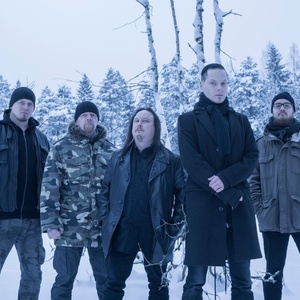 Concert of Tomb of Finland in Oluthuone Paasikivi

You have a great opportunity to see Tomb of Finland, on Oct. 1, 2022 at Oluthuone Paasikivi in Kerava.

About Tomb of Finland

Tomb Of Finland got the first shovel full of soil into it's mouth in the fall of 2009.
The first album ”Below the green” was written from thousands of nights filled with torment and mourning.
Jasse contacted his previous band member A.Karihtala (CHARON,WOLFHEART, later also KYPCK). For the vocals Antti suggested to ask Ville (SEITH, DAWN OF RELIC, CRYPTID) to join our woe. First three coffins were now full and ready to rot.
New period of shovels, soil and darkness started. It was important period of seeking more rotten flesh to be gathered together as a full band. Mikko Hannuksela (CARTILAGE,VOMITURITION,ENOCHIAN CRESCENT,GHOSTGUARD) found from neighbour cemetary.

After dark and cold period of slow rotting. Hungry worms growled angry in frozen soil.
We felt some movements in our rotten flesh. That was a good start of more active and noisy season of our decaying.
Couple of tombs were opened, corpses exhumed and some open tombs got flesh inside to feed the worms in the soil.
-H- joined as bass player and Olli (KAUNIS KUOLEMATON) as new singer. New line-up was built in our silent tombs for future earthly liveperformances.
Frozen soil was digged and the cemetery gate was opened again. One special corpse A.Karihtala exhumed and returned to living. He left the band physically, but will stay with us spiritually in future. New life was written also into -H-'s in memoriam. He returned to living too. Fresh and agressive corpse Janne Manninen (AND OCEANS,MYGRAIN,MAGENTA HARVEST) was joined our casket ride and replaced A.Karihtala on drums.

In the fall of 2014 debut album "Below the green" was mastered in Unisound studios by Dan Swanö. In the heart of winter 2015 Tomb of Finland signed a deal with Mighty Music.
After decaying in silence, Janne M. urged to return to living. His memory is well reserved in the ranks of darkness. He was replaced by more sinister fellow from nearby cascets Janne Lukki, and Ville Kangasharju took over to strangle the living with lower strings of daemonic forces and present line-up was formed as:

After newly decaying corpses was laid to rest, the northern darkness fell upon cascets that was open and rotting from new material.

The second album ”Frozen beneath” was born with a birthmark of the five caskets. In the fall of 2017 first studio sessions started. Album got it’s final appearance by Finnish producer Hiili Hiilesmaa in the end of year 2017.

In the year 2018 fall, the foul darkness is set upon the world by Tomb of Finland and Mighty Music again.

Paasikivenkatu 4, 04200 Kerava, Finland
Kerava, Finland
See all rock & metal events in Oluthuone Paasikivi
You may also like
{"location":"City", "band":"Band name", "genre": "Genres", "place":"Place", "event":"Festivals in"}
{"message":"We use cookies to enhance your experience. By continuing to visit this site you agree to our use of cookies.","info":"More info", "link":"https://en.wikipedia.org/wiki/Cookie" }