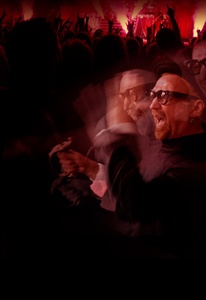 You have a great opportunity to see IP Orchestra, on Oct. 21, 2022 at ДК Химиков in Dzerzhinsk.

The 2009 year saw the birth of a new ensemble – the Symphony Orchestra conducted by Igor Ponomarenko, IP Orchestra.
Over a short period of time, a grandiose work has been done to create the Orchestra’s unique repertoire: the ensemble performs film music by E. Artemyev, A. Zatsepin, A. Petrov, V. Dashkevich, I. Dunayevsky, E. Ptichkin, I. Schwartz, N. Rota, E. Morricone, classical pieces by W. Mozart, F. Mendelssohn, G. Verdi, G. Rossini, J. Strauss, M. Glinka, P. Tchaikovsky, D. Shostakovich, A. Khachaturian, as well as popular and dance music.
From the very first year of its existence, the Orchestra had a full schedule of performances, along with executing important government projects both in Russia and abroad and participating in major events such as celebration of the 65th anniversary of the Victory, Russia Day, St.-Petersburg Kinoforum, the 300th anniversary of Tsarskoye Selo and Oranienbaum, the “Salnikow Cup” Opening Ceremony, a unique major multimedia show “Scarlet Sails”, the VI International Dance Sport Tournament (Governor’s Cup 2010), concerts of Soundtrack project, recording of music for motion pictures. A great success was the concert tour of the Orchestra under I. Ponomarenko in UAE with performances of music from the “Matrix” and “Transformers” motion pictures, as well as its concert tour of Estonia. Brilliantly organized by the ensemble were the author’s recitals devoted to V. Dashkevich, E. Artemyev and A. Zatsepin.
In October 2010 the “LOVE” album was released featuring music of one of the most fashionable and sought-after composers of today – Eduard Artemyev.
The Saint-Petersburg Symphony Orchestra conducted by Igor Ponomarenko is the only academic orchestra in Saint-Petersburg that uses modern acoustic systems (electronics) in addition to conventional symphony orchestra instruments. The Orchestra cooperates with the best DJs of Saint-Petersburg: Vlad Zhukov, Pavel Zavyalov and others.
Among soloists performing with the Orchestra under Igor Ponomarenko are: Anna Netrebko, Iosif Kobzon, Emma Shapplin, Anastasia Maksimova, leading soloists of the Mariinsky and Mikhailovsky theatres.