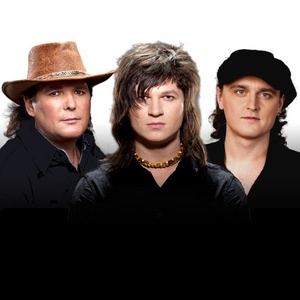 You have a great opportunity to see Нэнси, on Nov. 18, 2022 at Alexela Concert Hall in Tallinn.

Nensi (Нэнси) is a Ukrainian-Russian musical band founded in 1992 in the city of Kostiantynivka (Donetsk Oblast) by the singer-songwriter Anatoly Bondarenko. The band is best known for its song "Dym sigaret s mentolom" ("Дым сигарет с ментолом").

Nensi received positive feedback from music critics, being credited as a successful project of contemporary pop-culture.

On 31 January 2016, one of the band members, Sergey Bondarenko, was arrested in Sheremetyevo International Airport, when returning to Russia from Germany, being accused of security threats to Russia. Later he was deported back to Germany with an interdiction to not re-enter Russia until 2018.

Estonia puiestee 9, 10148 Tallinn, Estonia
Tallinn, Estonia
See all rock & metal events in Alexela Concert Hall
You may also like
{"location":"City", "band":"Band name", "genre": "Genres", "place":"Place", "event":"Festivals in"}
{"message":"We use cookies to enhance your experience. By continuing to visit this site you agree to our use of cookies.","info":"More info", "link":"https://en.wikipedia.org/wiki/Cookie" }