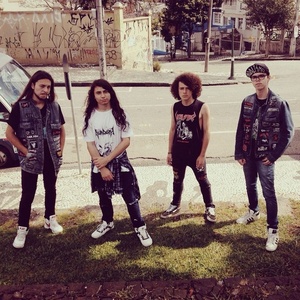 Concert of Blackened in RocHaus

You have a great opportunity to see Blackened, on Dec. 9, 2022 at RocHaus in West Dundee, IL.

By the end of 2013 it’s formed the band Blackened, initially composed by Joao Wegher, Ulisses Nathan, Marcelo Martins and Fernando Schwartz, in Curitiba/Brazil. Right after the beginning of the activities, it was recorded the demo “Third World Thrash”, followed by the split with the local hardcore band Emergencia, called “Together in the cycle pit”. After some concerts in the city, the band decided to record its first EP, “Underground Attack”, which took the band to other cities around Brazil. In 2015 the band closed a deal with the German label Witches Brew Records, which it’s known for releasing bands like Toxic Holocaust, Gama Bomb and Deathhammer. In 2016 the band decided to record its debut full length, called “Truth Behind Destruction, also released through Witches Brew and recorded, mixed and mastered in the Aero Diesel Studio. During the recording process some problems needed to be solved, like changes in the lineup and health problems with the producer and owner of the studio, Marcelo Speditto. Although it took longer than expected, “Truth Behind Destruction” had its release concert on the first week of October, marking a new path in the band’s carrier, with bigger concerts and gigs. Blackened has several influences: starting with heavy metal bands like Motorhead, Black Sabbath and UFO; Bay Area ones like Testament, Vio-lence and Metallica; Punk like Black Flag, Ratos de Porão and Discharge, ending with a bit of Brazilian Rap and Brazilian Popular Music.