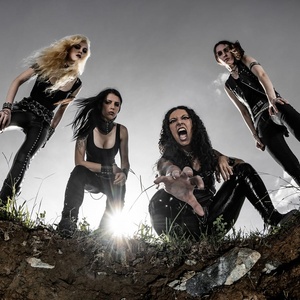 Concert of Crypta in Célula Showcase

You have a great opportunity to see Crypta, on Dec. 10, 2022 at Célula Showcase in Florianópolis.

Crypta is a Brazilian/Dutch death metal band, formed in 2019.

Around May 2019, Luana Dametto and Fernanda Lira founded Crypta, firstly intended to be a side project where they could write death metal. Later that year, in June, the Dutch Sonia Anubis was invited to join the project as one of their guitarists. With a provisional trio line-up, the band started creating their first music. Almost a year later, in April 2020, the Brazilian guitarist Tainá Bergamaschi was added to the line-up, consolidating Crypta finally as a quartet. In that same month, Fernanda and Luana quit their previous band Nervosa and Crypta naturally became their main current project, so the band was firstly and officially introduced in public in May 2020.

Shortly after that, the band signed their first record deal with the label Napalm Records and a booking deal with Napalm Events. From then on, Crypta finished writing their first songs and shortly started the pre-production of their debut album.

In January 2021, the band gathered up in Sao Paulo, Brazil, to record their first full length, at Family Mob Studio. “Echoes of the Soul” was recorded in 3 weeks and was engineered by Otávio Rissato, produced by Thiago Vakka (Fossilization, Jupiterian), mixed by Arthur Rizk and mastered by Jens Bogren at Fascination Street Studio. The cover artwork was painted by Wes Benscoter. They also took this time in Brazil to shoot their first videoclip, for the song “From the Ashes”, which was directed by the Brazilian filmmaker André Gustavo (Uncanny Filmes and 02 Filmes) and had the cinematography signed by Pepe Mendes.

Three singles were premiered before the album release. “From the Ashes” was the first one, featuring an official videoclip, out on April 7th, “Starvation”, out as a lyric video on May 11th and the last one being an official videoclip and band playthrough for “Dark Night of the Soul”. The album had it’s worldwide release on June 11th, 2021, by Napalm Records. It was also licensed and released on the same date in Brazil and Argentina by Dynamo Records, in Russia by Soyuz Music and Japan by Ward Records.

A bit before the release of their debut full length, Crypta already had announced their first shows, the first one being at the festival Wacken Open Air, planned for August 2022, and an European tour alongside with Deicide and Krisiun, scheduled for April and May 2022.

Rodovia João Paulo, 75 - Saco Grande, Florianópolis - SC, 88030-300, Brazil
Florianópolis, Brazil
See all rock & metal events in Célula Showcase
You may also like
{"location":"City", "band":"Band name", "genre": "Genres", "place":"Place", "event":"Festivals in"}
{"message":"We use cookies to enhance your experience. By continuing to visit this site you agree to our use of cookies.","info":"More info", "link":"https://en.wikipedia.org/wiki/Cookie" }