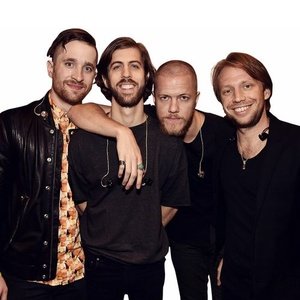 Tune in FREE to Imagine Dragons' special acoustic performance livestreamed from the 2022 RISE UP Benefit Gala on the Bandsintown Twitch channel Friday September 23.
RSVP and you'll automatically be entered to win a guitar signed by Imagine Dragons used live in their 2022 RISE UP Gala performance and a TRF merch pack.
Bandsintown and the Tyler Robinson Foundation are proud to partner again this year to continue to strengthen families financially and emotionally as they cope with the tragedy of a pediatric cancer diagnosis.
Help us reach our goal of $15,000 which will cover 15 months of out-of-pocket living expenses provided to the families who are part of TRF.
Donate here: https://bandsintown2022.funraise.org/
Bandsintown Contest Rules: https://bit.ly/3xr97Ap

Imagine Dragons is an American rock band from Las Vegas, Nevada, consisting of lead vocalist Dan Reynolds, lead guitarist Wayne Sermon, bassist and keyboardist Ben McKee, and drummer Daniel Platzman. The band first gained exposure in 2012 with the releases of their debut studio album Night Visions and its first single "It's Time". Billboard placed them at the top of their "Year In Rock" rankings for 2013, and named them their "Breakthrough Band of 2013". Rolling Stone named their single "Radioactive" from Night Visions the "biggest rock hit of the year", and MTV called them "the year's biggest breakout band". Night Visions peaked at number two on the weekly US Billboard 200 chart and the UK Albums Chart. The band's second studio album Smoke + Mirrors was released in 2015, and reached number one in the US, Canada and the UK. After touring for their sophomore record, the band took a brief hiatus to focus on their personal lives. During the latter half of 2016, they began recording their third studio album, Evolve, released in 2017. While all three albums were commercially successful, critical reception was mixed.
Imagine Dragons has won two American Music Awards for Favorite Alternative Artist, a Grammy Award for Best Rock Performance, five Billboard Music Awards, and a World Music Award. In May 2014, the band was nominated for a total of fourteen different Billboard Music Awards, including Top Artist of the Year and a Milestone Award, which recognizes innovation and creativity of artists across different genres. Imagine Dragons have sold 9 million albums and 27 million singles worldwide.