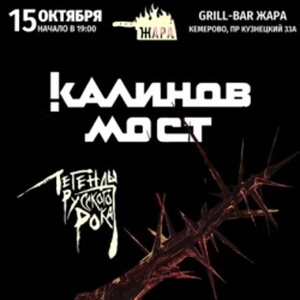 You have a great opportunity to see Калинов Мост, on Oct. 15, 2022 at Gril-bar Zhara in Kemerovo.

Kalinov Most (Калинов мост, "Kalinov bridge") is a Russian folk rock band, one of the most popular bands in Russia.

The band was formed in 1984 by vocalist and songwriter Dmitry Revyakin in Novosibirsk, Siberia, USSR. They are widely considered to be the first Russian folk rock band.

Their music and lyrics are deeply influenced by Russian folk music and Slavic mythology. The name "Kalinov Most" itself refers to a bridge between the world of the living and the world of the dead in Russian heroic tales and legends. Since frontman Dmitry Revyakin became a born again Christian in 2000, emphasis shifted from Paganism to Christian themes.

Kalinov Most prefers to play their own compositions rather than original folk songs.

avenue. Kuznetsky, 33A, Kemerovo, Kemerovo region, 650000, Russia
Kemerovo, Russia
See all rock & metal events in Gril-bar Zhara
You may also like
{"location":"City", "band":"Band name", "genre": "Genres", "place":"Place", "event":"Festivals in"}
{"message":"We use cookies to enhance your experience. By continuing to visit this site you agree to our use of cookies.","info":"More info", "link":"https://en.wikipedia.org/wiki/Cookie" }