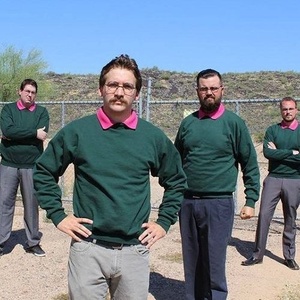 Come dressed as Ned!
Or any other character from the show (that we're not sure we can legally mention).
Earlier this year, us Ned announced we would be taking an indefinite hiatus. Before that, we're playing one last show and we need your help to do something big.
We're attempting to break the world record for 'Most People Dressed Like Characters from The Simpsons in one place'.
See you there neighborinos!

Okilly Dokilly is a metalcore band from Phoenix, Arizona that plays "Nedal" music; a subgenre of metal music themed around the animated character Ned Flanders from the television series The Simpsons. All five of the band's members perform dressed as Flanders, and the majority of the lyrics to their songs are quotes of his. The band members go by the names Head Ned, Bled Ned, Red Ned, Thread Ned and Stead Ned. The unusual concept behind the group has resulted in worldwide attention. The lead singer, Head Ned, said that Nedal music is "Not as fast as Bartcore, and a little cleaner than Krusty Punk”, references to hardcore punk and crust punk, respectively.
As of June 12, 2017, the band has acquired over 49,000 likes on Facebook. The band's first studio album, Howdilly Doodilly, was released on November 11, 2016. They announced their first nationwide tour via YouTube on February 5, 2017. On March 3, the band announced on instagram that Stead Ned and Thread Ned would be replaced on the upcoming tour by Dead Ned on lead guitar and Cred Ned on bass, respectively.