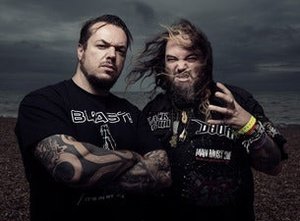 Cavalera Conspiracy is an American heavy metal band founded by Brazilian brothers Max (vocals, rhythm guitar) and Igor Cavalera (drums), currently performing along with American musicians Marc Rizzo (lead guitar) and Tony Campos (bass). The band originally formed in 2007 as Inflikted but changed its name for legal reasons. The group's creation marked the end of a 10-year feud between the Cavalera brothers who founded Sepultura in the early 1980s.
Following the brothers' falling out, Max had formed a new band, Soulfly, and Igor had recorded four studio albums with Sepultura before leaving the band in January 2006. In July 2006, Max received an unexpected call from his brother, and by the end of the conversation, Max had invited Igor to visit him in Phoenix, Arizona, to perform in a Soulfly show. Igor joined Soulfly in concert and performed two Sepultura songs. After the show, Max suggested they begin a new project, and Igor accepted. To complete the band, Max chose Soulfly guitarist Marc Rizzo and the Gojira frontman Joe Duplantier to play bass guitar. The group then recorded their debut album at Undercity Studios in Los Angeles with engineer and co-producer Logan Mader in July 2007. Named after the band's original moniker, Inflikted was released through Roadrunner Records on 25 March 2008.