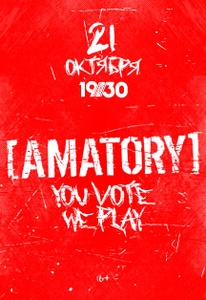 Concert of Amatory in 1930 Moscow

Amatory (commonly stylized as [AMATORY], to fit their logo) is a Russian metalcore band from Saint Petersburg, Russia, formed in 1998 by Denis [DENVER] Zhivotovsky and Daniil [STEWART] Svetlov.

Later in 1998, they were joined by Eugene PJ Potekhin, but the official birthday of the band is April 1st, 2001, when Sergey [GANG] Osechkin joined and the trio became a quartet.

They are considered to be among the pioneers of Russian alternative metal, also their musical approach changed over the years.

Despite relatively little media exposure, Amatory in a short time gained huge popularity through their live performances in Russia, Eastern and Northern Europe, and Central Asia.

At the moment they have released 7 full-length studio albums, 2 instrumental albums and 4 EPs.