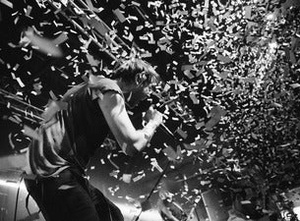 Concert of Thursday in The Ritz

This event is 21 and over. Any Ticket holder unable to present valid identification indicating that they are at least 21 years of age will not be admitted to this event, and will not be eligible for a refund.

Thursday released their debut album, Waiting, in late 1999 with original guitarist Bill Henderson, who left the band in 2000 and was replaced by Steve Pedulla. The band gained popularity with the release of their second album, Full Collapse, in 2001, and released their third album and major label debut, War All the Time, in 2003, which reached number seven on the US Billboard Top 200 Albums chart. Thursday released their fourth album, A City by the Light Divided, in 2006, and two further albums, Common Existence (2009) and No Devolución (2011), before announcing an indefinite hiatus in 2011. In a January 2013 interview, Geoff Rickly confirmed that the band had officially disbanded. However, the band announced a reunion in 2016 and performed a series of shows within the next few years. In October 2018, the band announced their reunion would conclude with a performance at Saint Vitus in Brooklyn, New York on March 17, 2019; despite this, Thursday had played more shows by the end of 2019, and resumed activity as a band in the fall of 2021 with a series of live dates, including an appearance at Riot Fest in Chicago.

The band has been considered an influential band of the post-hardcore music scene in the 2000s, and is credited as one of the key bands to popularize the darker emo sound and screaming vocals which came to prominence at the time.