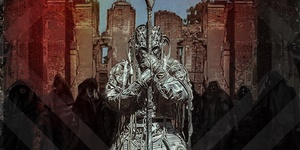 You have a great opportunity to see Biopsyhoz, on Oct. 20, 2022 at GlavClub in Moscow.

After they became a fully-formed group in Vladivostok, BioPsyhoz fairly quickly rose to become a leader in the extreme sub-culture movement. In 2001, BioPsyhoz produced and put out " VLAD-EXTREME #1 " - the first collection of extreme music from Vladivostok. In 2002 , the album "VLAD-EXTREME #2” was released. To escort the release of the album on August 30th, 2002, a large-scale “Festival of the Extreme Culture”, uniting extreme sports and extreme music, was set up in the Amur Gulf. In the beginning of 2003, the collective moved to Moscow in hopes of finding support for their new album " Cerebral Sex ." Unfortunately, for a set of various reasons, the album was not released even in Moscow. Work began on a new album, “Period C,” as the group simultaneously performed on various Moscow stages. To the group’s own surprise, their music interested cinematographers, who used it in several soundtracks. For the duration of a year and a half, the group made soundtracks for such films as: ”Nightwatch,” “Antikiller 2,” “Deadline,” “The Man Who Kept Silent,” and also for an advertisement of “Panasonic” telephones. (For more details about that, and also fragments from the films listed, have a look at the Promo DVD)
In 2005, The company “SOYUS” published BioPsyhoz’s first album “Period C.” This album is the culmination of all the sound and lyrical experiments BioPsyhoz has made in the past two years. The collective is completely open to working with other artists. BioPsyhoz has done a lot of work with many different artists from different styles and genres of music. The group has worked with pop singer Ilene Kaufmann, Groose, a brutal rapper from Rostov. Work was also done with London rapper Rapid, and joint projects have been started with “Samadhi.” BioPsyhoz has also made many remixes of other artists’ works. At the end of 2005, BioPsyhoz filmed and presented a short film “The Evacuator.” The film has caused a buzz, and BioPsyhoz is getting ready to make another one.
In 2006, the company “Megaliner” released BioPsyhoz’s second album “Period C Rmx album.” Many people from different regions of Russia and Israel have been worked on this album. Because of this, the alternative industrial sound of BioPsyhoz is now on an entirely different expressive experimental level. The biting mixture of various styles (IDM, EBM, Industrial, Experimental, Hard Trance, Psychodelic, Ambient, Noise, Break Beat, Techstep and others) and a highly professional performance level make the 70 minute composition of 19 tracks a truly noticeable and significant work in the development and evolution of Russia’s electronic scene. BioPsyhoz’s front man and main ideologist, Sergei Shubin while talking about the new album said: It’s really gratifying to know that BioPsyhoz has interested very strong, experimental electronica artists. The fact that I’m working with them has opened new horizons for me. I hope that this luck won’t wear out, and our sound will capture a much greater audience.
At the end of 2006, BioPsyhoz let out a new album 4#P.L.O.D. It took about two years to make the album. A lot of work was done and from 70 songs only 15 were chosen. P.L.O.D. is of superior quality than the previous album. The sound is more professional and is a lot more thoughtful, still experimenting with human consciousness. Many artists from different styles, such as metal, pop, hip-hop, and opera, have taken part in making the album. Ilene Kaufman, the group “Безумные Усилия,” and D.J Hobot from the rap collective “Kasta,” Rapid from London, Oksana Korniyevskaya, the group “Иван Панфиlove,” Olesia Lyashenko have all greatly helped in making the album. The punk-art artist Jazzz, who’s genre of work is called “neuro-psychodelic surrealism”, was invited to work on the pamphlet to accompany the P.L.O.D. disc. The 16 page pamphlet tells the story of characters living through the P.L.O.D. period. The fourth period goes in the footsteps of the ideological conception started in 1999.