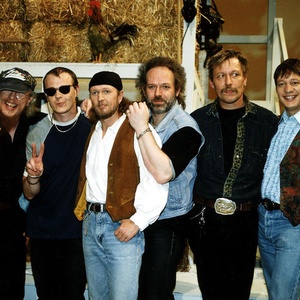 Concert of Torfrock in M.A.U. Club

Torfrock (German pronunciation: [ˈtɔʁfʁɔk], lit. "Peat Rock") is a German rock group founded by Klaus Büchner and Raymond Voß in 1976. Guitarist Jürgen Lugge from Hamburg played lead guitar until his unexpected death in 1992. With their Northern German identity, they are notable for keeping alive the native Low German language in their lyrics. With many of their songs being Low-German covers of Anglo-American standards, their music style ranges from R'n'B to blues rock and folk rock.

Their humorous to surreal song lyrics mostly deal either with 10th-century Viking Rollo (in an interpretation obviously strongly reminiscent of Dik Browne's Hägar the Horrible rather than the actual historical person) situated in Hedeby instead of Skandinavia in their songs, or life in the modern-day fictional Schleswig-Holstein rural village of Torfmoorholm (lit. "Peatbogville").

Beside being a trademark of modern-day Northern German culture, the band is closely associated with another Northern German icon, the Werner comics and movie franchise created by comic artist Rötger Feldmann (aka Brösel), not only because the band wrote the original soundtrack to the first Werner movie and partly to its sequels, but also because Torfrock singer Büchner voices character Werner in the movies. Also, Torfrock guitarist and singer Voss voices the Präsi, the choleric leader of a biker gang Werner is a member of.