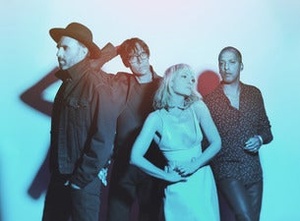 Concert of Metric in The Fillmore

Metric has partnered with PLUS1 so that $1 per ticket goes to supporting War Child and their work to empower children and families in communities affected by war throughout the world.

The band's first studio album, Old World Underground, Where Are You Now?, was released in 2003. Live It Out, released in 2005, was nominated for the 2006 Polaris Music Prize for the "Canadian Album of the Year" and for the 2006 Juno Awards for "Best Alternative Album". Their third studio album, Grow Up and Blow Away, was recorded in 2001; it was initially planned as their debut album, but was delayed for many years and finally released, with some changes, in 2007.

Their seventh full-length record, the Justin Meldal-Johnson produced Art of Doubt, was released on September 21, 2018.