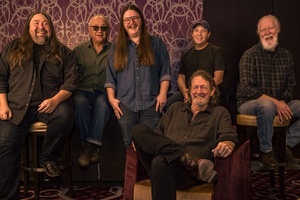 Concert of Widespread Panic in The Theater at MGM National Harbor

Widespread Panic is an American rock band from Athens, Georgia. The current lineup includes guitarist/singer John Bell, bassist Dave Schools, drummer Duane Trucks, percussionist Domingo "Sunny" Ortiz, keyboardist John "JoJo" Hermann, and guitarist Jimmy Herring. Michael Houser and George McConnell have also played lead guitar for the band, Todd Nance retired in 2016 as their original drummer.
The band was formed in Athens, Georgia, in 1986, and is influenced by the Southern rock, blues-rock, progressive rock, funk and hard rock genres. They have been compared to other jam bands such as the Grateful Dead and Phish. Widely renowned for their live performances, as of 2015, they hold the record for number of sold-out performances at Red Rocks Amphitheatre (Morrison, Colorado) at 54 and Philips Arena (Atlanta, Georgia) at 20.

The Theater at MGM National Harbor

MGM National Harbor Resort & Casino, 101 MGM National Ave, Oxon Hill, MD 20745, USA
Oxon Hill, MD, USA
See all rock & metal events in The Theater at MGM National Harbor
You may also like
{"location":"City", "band":"Band name", "genre": "Genres", "place":"Place", "event":"Festivals in"}
{"message":"We use cookies to enhance your experience. By continuing to visit this site you agree to our use of cookies.","info":"More info", "link":"https://en.wikipedia.org/wiki/Cookie" }