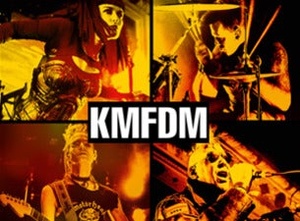 Concert of KMFDM in Heaven at The Masquerade

KMFDM (originally Kein Mehrheit Für Die Mitleid, loosely translated by the band as "no pity for the majority") is an industrial band led by German multi-instrumentalist Sascha Konietzko, who founded the group in 1984 as a performance art project.
The group's earliest incarnation included German drummer En Esch and British vocalist Raymond Watts, the latter of whom left and rejoined the group several times over its history. The trio recorded the band's earliest albums in Germany before Konietzko and Esch moved to the United States, where they found much greater success with seminal industrial record label Wax Trax!. German guitarist Günter Schulz joined in 1990; both he and Esch continued with the band until KMFDM broke up in 1999. Konietzko resurrected KMFDM in 2002 (Esch and Schulz declined to rejoin) on Metropolis Records, and by 2005 he had assembled a consistent line-up that included American singer Lucia Cifarelli, British guitarists Jules Hodgson and Steve White, and British drummer Andy Selway. Konietzko and Cifarelli moved back to Germany in 2007, while the rest of the band stayed in the U.S. In addition to these core members, dozens of other musicians have worked with the group across its nineteen studio albums and two dozen singles, with sales totaling in excess of two million records worldwide.
Critics consider KMFDM to be one of the first bands to bring industrial music to mainstream audiences, though Konietzko refers to the band's music as "The Ultra-Heavy Beat". The band incorporates heavy metal guitar riffs, electronic music, samples, and both male and female vocals in its music, which encompasses a variety of styles including industrial rock and electronic body music. The band is fiercely political, with many of its lyrics taking stands against violence, war, and oppression. KMFDM normally tours at least once after every major release, and band members are known for their accessibility to and interaction with fans, both online and at concerts. Members, singly or working together and with other musicians, have recorded under many other names, primarily Watts' Pig, Konietzko's Excessive Force, and Esch and Schulz's Slick Idiot.

Heaven at The Masquerade

50 Lower Alabama Street, Atlanta, GA 30303, USA
Atlanta, GA, USA
See all rock & metal events in Heaven at The Masquerade
You may also like
{"location":"City", "band":"Band name", "genre": "Genres", "place":"Place", "event":"Festivals in"}
{"message":"We use cookies to enhance your experience. By continuing to visit this site you agree to our use of cookies.","info":"More info", "link":"https://en.wikipedia.org/wiki/Cookie" }