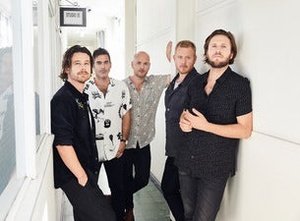 Boy & Bear are an Australian indie folk band formed in 2009, consisting of David Hosking (vocals and guitar), Killian Gavin (vocals and guitar), Tim Hart (drums and vocals), Jonathan Hart (vocals, banjo, mandolin and keyboards), and David Symes (bass). The band has released two EPs and four studio albums. The first two albums, Moonfire (August 2011) and Harlequin Dream (August 2013), reached the top ten of the Australian albums chart. Their third album, Limit of Love, was released on 9 October 2015, in Australia, New Zealand, the United States, and Canada, and on 30 October in the UK and Europe. On 27 September 2019, after a four-year break, they released their long-awaited fourth studio album, Suck on Light.

Enghavevej 40, 1674 Copenhagen, Denmark
Copenhagen, Denmark
See all rock & metal events in Lille Vega
You may also like
{"location":"City", "band":"Band name", "genre": "Genres", "place":"Place", "event":"Festivals in"}
{"message":"We use cookies to enhance your experience. By continuing to visit this site you agree to our use of cookies.","info":"More info", "link":"https://en.wikipedia.org/wiki/Cookie" }