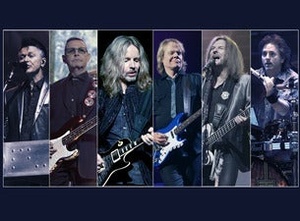 In the best interest of fans and staff, the Event Organizer will continue to monitor local COVID-19 trends and meet or exceed protocols mandated by local governments. Fans attending the event agree to abide by the health and safety measures in effect at the time of the event, which may include, but not be limited to, wearing masks, providing proof of vaccination status and/or providing proof of negative COVID-19 test. Check your event venue website often as guidelines are subject to change.

Styx (/stɪks/) is an American rock band from Chicago that formed in 1972 and is best known for melding hard rock guitar balanced with acoustic guitar, synthesizers mixed with acoustic piano, upbeat tracks with power ballads, and incorporating elements of international musical theatre. The band established itself with a progressive rock sound in the 1970s, and began to incorporate pop rock and soft rock elements in the 1980s.

Beginning with Styx in 1972, the band usually released an album every year throughout the 1970s. Styx II (1973) had the sleeper hit "Lady", a power ballad which reached No. 6 in the US, helping the album make the top 20. "Lady" was also a top 20 hit in Canada, Australia and New Zealand. Equinox (1975) and Crystal Ball (1976) reached the US top 70 with the first featuring "Lorelei", a No. 6 hit in Canada, while the second marked the addition of Tommy Shaw to the band.

Styx's commercial breakthrough in North America came with The Grand Illusion (1977), which peaked at No. 6 in both the US and Canada, and became the first of four straight triple-platinum albums in the US for Styx. It featured the single "Come Sail Away", a top 10 hit in both countries. The band's follow-up, Pieces of Eight (1978), was another No. 6 hit in the US, but peaked higher in Canada due to the top 10 hits "Renegade" and "Blue Collar Man (Long Nights)". In 1979, Styx's Cornerstone went to No. 2 in both countries on the strength of the cross-border No. 1 hit ballad "Babe". The album became their breakthrough album in Australia and New Zealand, reaching the top 20, with "Babe" peaking at No. 3. "Babe" was a No. 6 hit in the UK, their first and only top 40 hit there, leading Cornerstone to be their first album to chart there (at No. 36).

In 1981, Styx's Paradise Theatre was a No. 1 album in the US and Canada, while also reaching the top 10 in Scandinavia and the UK (their biggest album there) and the top 30 in Australia and New Zealand. "The Best of Times" off the album reached No. 1 in Canada, No. 3 in the US, and the top 30 in several other countries, while "Too Much Time on My Hands" was also a top 10 hit in North America. Kilroy Was Here (1983) was Styx's last major hit album, reaching the top 3 in North America and the top 10 in Scandinavia, although it was less successful elsewhere. Its lead single, "Mr. Roboto", became Styx's third chart-topper in Canada, was a No. 3 hit in the US, and was their biggest hit in Germany (No. 8). After a seven-year break, Styx returned with Edge of the Century (1990), which reached No. 63 in the US with its single, "Show Me the Way", becoming a top 3 hit in North America in early 1991.

Overall, Styx had eight songs that hit the top 10 on the US Billboard Hot 100, as well as 16 top 40 singles. Seven of their eight top 10 singles were written and sung by founding member and lead singer Dennis DeYoung, who has not been part of the band since 1999. Styx sold over 20 million records for A&M between their signing in 1976 and 1984.

11455 87 Ave NW, Edmonton, AB T6G 2T2, Canada
Edmonton, Canada
See all rock & metal events in Northern Alberta Jubilee Auditorium
You may also like
{"location":"City", "band":"Band name", "genre": "Genres", "place":"Place", "event":"Festivals in"}
{"message":"We use cookies to enhance your experience. By continuing to visit this site you agree to our use of cookies.","info":"More info", "link":"https://en.wikipedia.org/wiki/Cookie" }