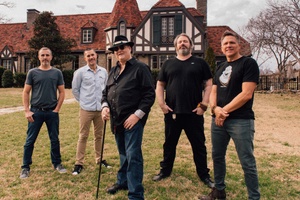 Concert Blues Traveler in The Signal

You have a great opportunity to see Blues Traveler, on March 18, 2022 at The Signal in Chattanooga, TN.

Blues Traveler is an American rock band formed in Princeton, New Jersey in 1987. The band's music covers a variety of genres, including blues rock, psychedelic rock, folk rock, soul, and Southern rock. It is known for extensive use of segues in their live performances, and was considered a key part of the re-emerging jam band scene of the 1990s, spearheading the H.O.R.D.E. touring music festival.
Currently, the group comprises singer and harmonica player John Popper, guitarist Chan Kinchla, drummer Brendan Hill, bassist Tad Kinchla, and keyboardist Ben Wilson. Tad Kinchla and Ben Wilson joined the band following the death of original bassist Bobby Sheehan in 1999.
While Blues Traveler is best known among fans for their improvisational live shows, the general public is most familiar with the group from their Top 40 singles "Run-Around" and "Hook". They gained mainstream popularity after their fourth studio album four, released in 1994. Sheehan's death and Popper's struggle with obesity put a damper on the group's success, and A&M dropped the band in 2002. However, the band took this transition period as an opportunity to start in new directions musically, going largely independent and releasing on smaller experimental labels.
In March 2012, Blues Traveler released a double-disc compilation entitled 25 on Hip-O Records; the album commemorates the band's silver anniversary and includes their hit singles, new covers, and previously unreleased b-side material. Blues Traveler's most recent studio album Blow Up the Moon, is the twelfth studio album and was released on April 7, 2015. As part of the Blow Up the Moon album, Blues Traveler released a music video using Rockstar editor in Grand Theft Auto V on September 14, 2015. The music video features JC Chasez and 3OH!3. On December 7, 2016, Blues Traveler released a cover version of "Go Tell It on the Mountain".