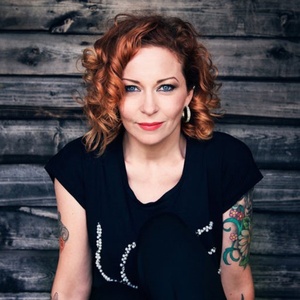 Anneke plays solo acoustic songs from her last album, but also some old songs and some of her favorites from other artists.

Anna Maria van Giersbergen (born 8 March 1973), known artistically as Anneke van Giersbergen, is a Dutch singer, songwriter, guitarist and pianist who became known worldwide as the lead singer and songwriter for the Dutch band The Gathering, between 1994 and 2007. She also has a solo career. The project was originally called Agua de Annique, but now goes by her own name.

A frequent collaborator of Arjen Anthony Lucassen, she portrayed main characters in the albums Into the Electric Castle, 01011001 and The Theater Equation by his project Ayreon. In 2014 they collaborated on a project called The Gentle Storm, which produced an album titled The Diary that was released in 2015. Since 2016 she has formed a new band VUUR with members of The Gentle Storm live band and her own solo band, to focus on the heavier side of her music. They released their debut album In This Moment We Are Free - Cities in October 2017.

Van Giersbergen has also prominently collaborated with Devin Townsend on many of his albums, Within Temptation, Anathema, Lawn, Farmer Boys, Napalm Death, Moonspell, Novembers Doom, Globus, Giant Squid, and many other artists and projects.

Kościuszki 79, 61-891 Poznań, Poland
Poznań, Poland
See all rock & metal events in Blue Note Jazz Club
You may also like
{"location":"City", "band":"Band name", "genre": "Genres", "place":"Place", "event":"Festivals in"}
{"message":"We use cookies to enhance your experience. By continuing to visit this site you agree to our use of cookies.","info":"More info", "link":"https://en.wikipedia.org/wiki/Cookie" }