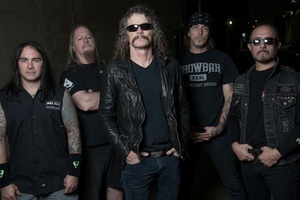 Prong is an American crossover thrash band formed in 1986 by vocalist and guitarist Tommy Victor, the band's sole constant member. To date, they have released twelve studio albums (including an album of song covers), one live album, four EPs, one DVD and one remix album. Prong had two independent releases, Primitive Origins (1987) and Force Fed (1989), which attracted the attention of Epic Records, who signed the band in 1989. Their first two albums on Epic — Beg to Differ (1990) and Prove You Wrong (1991) — were released to critical acclaim and garnered attention on MTV's Headbangers Ball. The band's 1994 album Cleansing was also very successful, and included one of their well-known songs "Snap Your Fingers, Snap Your Neck". After releasing one more album (Rude Awakening in 1996), Prong disbanded in 1997, but reformed in 2002 and has continued to tour and record since then.
A pioneer of the urban metal scene, Prong has influenced many notable musicians such as Korn's Jonathan Davis, Demon Hunter's Ryan Clark, and Nine Inch Nails' Trent Reznor.