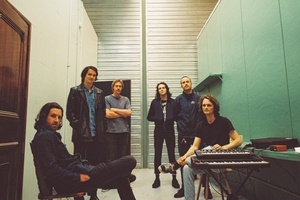 You have a great opportunity to see King Gizzard & The Lizard Wizard, on April 26, 2022 at Gundlach Bundschu Winery in Sonoma, CA.

Their second EP, Willoughby's Beach (2011), and debut album, 12 Bar Bruise (2012), primarily blended surf music and garage rock, and were released on Flightless, the band's own label. Their second album, a "psychedelic spaghetti western" titled Eyes Like the Sky (2013), features spoken-word narration by Broderick Smith. Float Along – Fill Your Lungs, released later in the year, and the 2014 albums Oddments and I'm in Your Mind Fuzz, saw the band expand on their psychedelic sound. In 2015, they drew on elements of jazz fusion and progressive rock with Quarters!, and also released the folk-inspired Paper Mâché Dream Balloon, recorded almost entirely using acoustic instruments. Nonagon Infinity (2016) features nine interconnected tracks that form an infinite loop, and won the ARIA Award for Best Hard Rock or Heavy Metal Album.[3][4]

In 2017, the band fulfilled a promise to release five studio albums within the year: Flying Microtonal Banana, an experiment in microtonality, in February; the three-chapter "sci-fi heavy metal epic" Murder of the Universe in June; Sketches of Brunswick East, an improvised jazz collaboration with Mild High Club, in August; Polygondwanaland, was released into the public domain, in November; and Gumboot Soup in December. The 2019 albums Fishing for Fishies and Infest the Rats' Nest saw the band tackle environmental themes and incorporate boogie rock and thrash metal into their sound, respectively.

Throughout 2020, the band released several live albums, a concert film, a double compilation of demos, K.G., their 16th studio album and a compilation of early singles and all the tracks on the Anglesea EP called Teenage Gizzard. In August, Eric Moore (the band's second drummer and manager) left the band to focus on running his record label, Flightless. In February 2021, the band released L.W., their third microtonal album, which was followed by the synth-based dream pop album Butterfly 3000 in June. These albums were released independently rather than on Flightless.