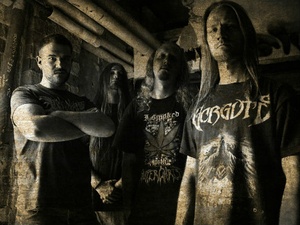 You have a great opportunity to see Defeated Sanity, on Feb. 27, 2022 at RockHouse Bar & Grill in El Paso, TX.

Defeated Sanity is a German technical death metal band from Dachsbach, Bavaria, that was formed in 1994, originally as a side project of guitarist Wolfgang Teske and his son, drummer Lille Gruber. Gruber is the only original remaining member left in the band, following the departure of Teske in July 2008. The other members are Christian Kühn (guitar), and Jacob Schmidt (bass guitar). For almost a year the band was looking for a new vocalist, due to Jens Staschel leaving the band shortly before Teske; Staschel's replacement, A.J. Magana from Disgorge, was announced in June 2009.

Defeated Sanity has released five studio albums: Prelude to the Tragedy (Grindethic Records, 2004), Psalms of the Moribund (Grindethic, 2007), Chapters of Repugnance (Willowtip Records, 2010), Passages into Deformity (Willowtip, 2013) and Disposal of the Dead / Dharmata (Willowtip, 2016). Defeated Sanity also released numerous promos, demos, and splits. Influenced by bands such as Cannibal Corpse and Suffocation, their music style is mostly based on American death metal.