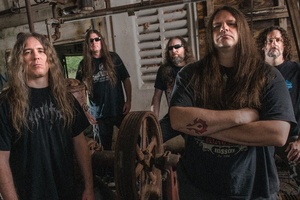 You have a great opportunity to see Cannibal Corpse with bands Revocation, Shadow Of Intent, Whitechapel, on March 14, 2022 at The Van Buren in Phoenix, AZ.

Cannibal Corpse is an American death metal band from Buffalo, New York. Formed in December 1988, the band has released thirteen studio albums, two box sets, four video albums, and two live albums. The band has had little radio or television exposure throughout its career, although a cult following began to build after the release of the 1991 album Butchered at Birth and 1992 album Tomb of the Mutilated. As of 2015, they had achieved worldwide sales of two million units for combined sales of all their albums, making them the top-selling death metal band of all time.
Bassist Alex Webster came up with the name Cannibal Corpse. They have had several lineup changes since their inception, with bassist Alex Webster and drummer Paul Mazurkiewicz as the only constant members. The members of Cannibal Corpse were originally inspired by thrash metal bands like Slayer and Kreator and other death metal bands such as Morbid Angel and Death. The band's album art (most often by Vincent Locke) and lyrics, drawing heavily on horror fiction and horror films, are highly controversial. At different times, several countries, such as Germany and Russia, have banned Cannibal Corpse from performing within their borders, or have banned the sale and display of original Cannibal Corpse album covers.