Emery: Rub Some Dirt On It Digital Experience 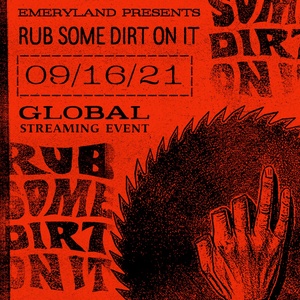 In a bold move, Emery aspires to take the concept of an album to the next level,
a live captured video album. Rub Some Dirt On It, the band's 9th full length,
was captured in under 2 hours with a full cinematic documentary crew on site to
capture the pressure and specialness of 6 musicians together creating at their
highest level in realtime.

Emery is an American post-hardcore band from Seattle, Washington currently signed to BadChristian Music. Emery was founded in Rock Hill, South Carolina by Toby Morrell, Devin Shelton, Matt Carter, Josh Head, Joel Green and Seth Studley, and moved to Seattle in order to reach a more music centered scene.
Before signing with Tooth & Nail Records, Emery recorded two EPs, The Columbus EEP Thee and The Weak's End demo that they used to attract attention from labels. With Tooth & Nail, they have recorded five studio albums, and two EPs. The Weak's End, their debut album, was released in 2004, followed by The Question in 2005 and I'm Only A Man in 2007. The latter fulfilled Emery's contract with Tooth & Nail. However, the band re-signed with the label and released ...In Shallow Seas We Sail on June 2, 2009. The album, We Do What We Want, was released on March 29, 2011, and the band's most recent album, You Were Never Alone, was released on May 19, 2015 via BadChristian Music.