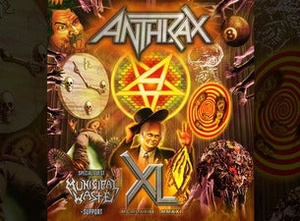 Concert of Anthrax in Rock City

Over 14s only. Curfew 23:00 This show will be fully compliant with up-to-date government Covid safety guidelines. A max of 6 tickets per person and per household applies. Tickets in excess of 6 will be cancelled.

8 Talbot St, Nottingham NG1 5GG, United Kingdom
Nottingham, United Kingdom
See all rock & metal events in Rock City
You may also like
{"location":"City", "band":"Band name", "genre": "Genres", "place":"Place", "event":"Festivals in"}
{"message":"We use cookies to enhance your experience. By continuing to visit this site you agree to our use of cookies.","info":"More info", "link":"https://en.wikipedia.org/wiki/Cookie" }