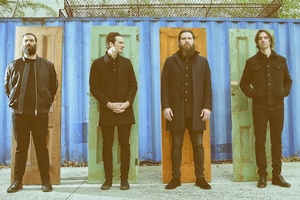 You have a great opportunity to see Manchester Orchestra, on Feb. 25, 2022 at The UC Theatre in Berkeley, CA.

Manchester Orchestra is an American indie rock band from Atlanta, Georgia, formed in 2004. The group is composed of rhythm guitarist-singer-songwriter Andy Hull, lead guitarist Robert McDowell, bassist Andy Prince and drummer Tim Very. Former drummer Jeremiah Edmond parted ways with the band in January 2010 to focus on his family and on running the band's record label, Favorite Gentlemen. The band's original bassist, Jonathan Corley, parted ways with the band in 2013. Keyboardist/percussionist Chris Freeman announced his departure from the band in September 2016.
Manchester Orchestra has released several extended plays and five studio albums: I'm Like a Virgin Losing a Child (2006), Mean Everything to Nothing (2009), Simple Math (2011), Cope (2014) (as well as its accompanying acoustic version, Hope) and A Black Mile to the Surface (2017). They are signed to independent record label Favorite Gentlemen Recordings, which is distributed through Sony Music Entertainment, and Loma Vista Recordings.
The band has performed at major music festivals such as Lollapalooza, Bonnaroo, Coachella, Riot Fest, Shaky Knees Music Festival, Firefly Music Festival, Reading and Leeds Festivals and more.