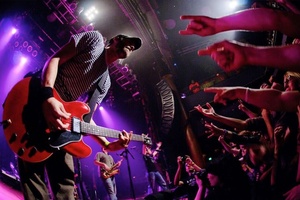 Concert Streetlight Manifesto in The Fillmore

You have a great opportunity to see Streetlight Manifesto, on Dec. 3, 2021 at The Fillmore in Silver Spring, MD.

Streetlight Manifesto is an American ska punk band from New Brunswick, New Jersey formed in 2002. They released their first album, Everything Goes Numb, which was distributed by Victory Records, on August 26, 2003. The band headlined and sold out their first concert at Rutgers University in New Brunswick, New Jersey on December 9, 2003. Several of Streetlight Manifesto's members were well known in the New Jersey third wave ska community for their roles in past ska punk bands from that area, primarily Kalnoky's Catch 22 and fellow New Jersey band One Cool Guy.