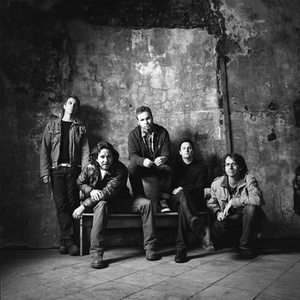 From June 18th through June 21st, Pearl Jam will be streaming their August 13, 2018 Missoula show from Washington-Grizzly Stadium. This Pay-Per-View event will begin on Friday, June 18th at 8PM ET and will run through Monday, June 21st at 11:59 PM ET exclusively on nugs.net.
Having already released both of the Home Shows, Pearl Jam is proud to unveil the 2018 Missoula concert as a part of the Away Shows collection to continue their support for organizations providing assistance to those facing hardships or experiencing homelessness.
What better way to kick of Fathers Day Weekend than by experiencing this 29-song show mixed in stereo and 5.1 digital surround sound by Pearl Jam Producer, Josh Evans. The never before seen footage includes rare songs and memorable covers and was captured with multiple High Definition cameras by videographer Blue Leach with additional editing by Pearl Jam archivist Kevin Shuss, making it specially edited for the best digital screening experience. Portions of the stream will be in glorious black and white.

Pearl Jam is an American rock band formed in Seattle, Washington, in 1990. Since its inception, the band's line-up has consisted of Eddie Vedder (lead vocals), Mike McCready (lead guitar), Stone Gossard (rhythm guitar) and Jeff Ament (bass). The band's fifth member is drummer Matt Cameron (also of Soundgarden), who has been with the band since 1998. Boom Gaspar (piano) has also been a session/touring member with the band since 2002. Drummers Dave Krusen, Matt Chamberlain, Dave Abbruzzese and Jack Irons are former members of the band.
Formed after the demise of Gossard and Ament's previous band, Mother Love Bone, Pearl Jam broke into the mainstream with its debut album, Ten, in 1991. One of the key bands in the grunge movement of the early 1990s, over the course of the band's career, its members became noted for their refusal to adhere to traditional music industry practices, including refusing to make proper music videos or give interviews, and engaging in a much-publicized boycott of Ticketmaster. In 2006, Rolling Stone described the band as having "spent much of the past decade deliberately tearing apart their own fame."
To date, the band has sold nearly 32 million records in the United States and an estimated 60 million worldwide. Pearl Jam has outlasted and outsold many of its contemporaries from the alternative rock breakthrough of the early 1990s, and is considered one of the most influential bands of that decade. Stephen Thomas Erlewine of AllMusic referred to Pearl Jam as "the most popular American rock & roll band of the '90s". Pearl Jam were inducted into the Rock and Roll Hall of Fame on April 7, 2017, in their first year of eligibility.