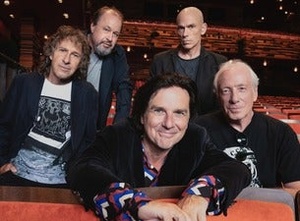 Concert of Marillion in Zenith Dijon

Marillion /məˈrɪljən/ are a British rock band, formed in Aylesbury, Buckinghamshire, in 1979. They emerged from the post-punk music scene in Britain and existed as a bridge between the styles of punk rock and classic progressive rock, becoming the most commercially successful neo-progressive rock band of the 1980s.
Marillion's recorded studio output since 1982 is composed of eighteen albums, generally regarded in two distinct eras, delineated by the departure of original lead singer Fish in late 1988 and the subsequent arrival of replacement Steve Hogarth in early 1989. The band achieved eight Top Ten UK albums between 1983 and 1994, including a number one album in 1985 with Misplaced Childhood, and during the period the band were fronted by Fish they scored eleven Top 40 hits on the UK Singles Chart. They are best known for the 1985 singles "Kayleigh" and "Lavender", which reached number two and number five respectively.
Marillion's first album released with Hogarth, 1989's Seasons End, was another Top Ten hit, and albums continued to chart well until their departure from EMI Records following the release of their 1996 live album Made Again and the dissipation of the band's mainstream popularity in the late 1990s; save for a resurgence in the mid- to late-2000s, they have essentially been a cult act since then. Marillion have achieved a further twelve Top 40 hit singles in the UK with Hogarth, including 2004's "You're Gone", which charted at No. 7 and is the biggest hit of his tenure. The band continue to tour internationally, and were ranked 38th in Classic Rock's "50 Best Live Acts of All Time" in 2008. In 2016, they returned to the UK Albums Chart Top Ten for the first time in 22 years with their highest chart placing since 1987.
Despite much antipathy towards them in the mainstream media and a consistently unfashionable status within the British music industry, Marillion have maintained an extremely loyal international fanbase, as well as being widely acknowledged as playing a pioneering role in the development of crowdfunding and fan-funded music. They have sold over 15 million records worldwide.

Parc de la Toison d'Or, Rue de Colchide, 21000 Dijon, France
Dijon, France
See all rock & metal events in Zenith Dijon
You may also like
{"location":"City", "band":"Band name", "genre": "Genres", "place":"Place", "event":"Festivals in"}
{"message":"We use cookies to enhance your experience. By continuing to visit this site you agree to our use of cookies.","info":"More info", "link":"https://en.wikipedia.org/wiki/Cookie" }