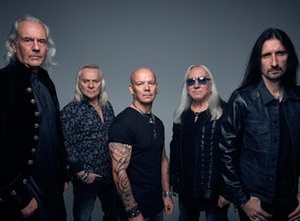 All Ages Permitted. Under 16s must be accompanied by an adult over 18. A max of 8 tickets per person and per household applies. Tickets in excess of 8 will be cancelled.

Uriah Heep are an English rock band formed in London in 1969. Twelve of the band's albums have made it to the UK Albums Chart (Return to Fantasy reached No. 7 in 1975) while of the fifteen Billboard 200 Uriah Heep albums Demons and Wizards was the most successful (#23, 1972). In the late 1970s the band had massive success in Germany, where the "Lady in Black" single was a big hit. Along with Led Zeppelin, Black Sabbath and Deep Purple, Uriah Heep had become one of the top rock bands in the early 1970s.
Uriah Heep's audience declined by the 1980s, to the point where they became essentially a cult band in the United Kingdom and United States. The band maintains a significant following and performs at arena-sized venues in the Balkans, Germany, Japan, the Netherlands, Russia and Scandinavia. They have sold over 40 million albums worldwide with over 4 million sales in the U.S, where their best-known songs include "Easy Livin'", "The Wizard", "Sweet Lorraine", and "Stealin'".

Broad St, Birmingham B1 2EA, United Kingdom
Birmingham, United Kingdom
See all rock & metal events in Symphony Hall
You may also like
{"location":"City", "band":"Band name", "genre": "Genres", "place":"Place", "event":"Festivals in"}
{"message":"We use cookies to enhance your experience. By continuing to visit this site you agree to our use of cookies.","info":"More info", "link":"https://en.wikipedia.org/wiki/Cookie" }