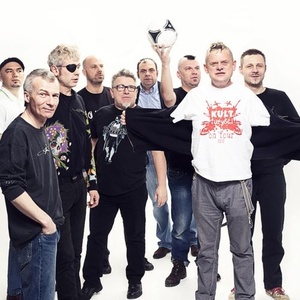 You have a great opportunity to see Kult, on Oct. 23, 2021 at Play Brew Taproom in Middlesbrough.

Kult is a Polish rock band formed in 1982 in Warsaw, originally consisting of Kazik Staszewski (lead vocals, saxophone), Piotr Wieteska (bass guitar), Tadeusz Bagan (guitars) and Dariusz Gierszewski (drums). Kult's early works were strongly influenced by alternative, progressive and punk rock, as well as the British new wave, but the band gradually incorporated more diverse and innovative styles in their music. The music of the band is primarily associated with strong lyrics by Staszewski and distinct wind section (saxophones, horn).
Before forming the band, all members of the original quartet had been playing together in either Poland or Novelty Poland, two bands led by Staszewski between 1979 and 1981. The first concert of the new band in July 1982 sold only 14 tickets. However, in 1986 the band recorded its first album (named eponymously "Kult"; released the following year), which attracted much attention and included early punk-inspired hits "Krew Boga", "O Ani" and "Wspaniała nowina". Initially the censorship office did not allow for release of many songs by Staszewski, clearly aimed against "the system". Also in 1987 a second album, the slightly psychedelic "Posłuchaj to do Ciebie" was released. Since then the band gained much popularity in Poland, with songs such as "Do Ani", "Arahja" and "Krew Boga" reaching #1 on Polish Radio 3 chart (LP3).
After 1989 and the end of Communist rule in Poland Kult enjoyed great success, with each of a series of albums bringing new hits to the tops of the radio charts. The "Generał Ferreira / Rząd oficjalny" from the 1991 album "Your Eyes" reached #1 on LP3 and stayed in the Top20 for 33 consecutive weeks. "Dziewczyna bez zęba na przedzie", "Komu bije dzwon", "Gdy nie ma dzieci" and "Lewy czerwcowy" (from the 1998 album "Ostateczny krach systemu korporacji") all reached #1 and stayed in the Top20 for 37, 38, 30 and 23 weeks, respectively. In addition, "Gdy nie ma dzieci" spent 9 weeks at #1, a former record among Polish artists, surpassed by Artur Rojek's "Syreny" in 2014.
Although the recent post-2000 albums by Kult enjoyed less popularity, Kult remains one of the best-known Polish musical groups. The band released a total of 13 studio albums and two live albums, including the 2010 recording of a MTV Unplugged concert.

8 Cannon Park Way, Middlesbrough TS1 5JU, United Kingdom
+441642244769
Middlesbrough, United Kingdom
See all rock & metal events in Play Brew Taproom
You may also like
{"location":"City", "band":"Band name", "genre": "Genres", "place":"Place", "event":"Festivals in"}
{"message":"We use cookies to enhance your experience. By continuing to visit this site you agree to our use of cookies.","info":"More info", "link":"https://en.wikipedia.org/wiki/Cookie" }