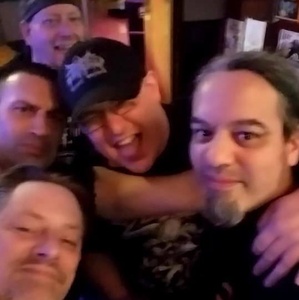 You have a great opportunity to see Putrid Pile with bands Kraanium, Epicardiectomy, on Nov. 17, 2021 at Klub Modrá Vopice in Prague.

Due to some circumstances beyond anyone’s control, Num Skull split up. Hence the birth of Putrid Pile.

Frustrated with Num Skull's breakup, i, (Shaun) had to press on and be a part of the sickness that is the underground! Knowing already what I wanted, I immediately picked up a drum machine and started writing intense, sick and twisted guttural death metal. By the end of 2000, Putrid Pile had enough material for a 5-song demo. Early in 2001, Putrid Pile went to Mercenary Digital Studios to record the demo and entitled it "Bleed For Me".

The first time it was ever released into public hands was at Milwaukee Metalfest 2001. It received a great response from the people who received a copy.

Shortly afterwards Putrid Pile concentrated on live shows and getting as much publicity as possible.

Putrid Pile continued to play gigs mercilessly and whore out free "Bleed For Me" demos to anyone who would take one in the US and around the world.

The demo received many awesome reviews and continued to get a great response in the underground from bands, zines, webzines, radio stations and fans.

The shockwaves of the release of the Bleed For Me demo are still being felt to this day! Eventually, Putrid Pile caught the ear of United Guttural Records and signed a one record deal with them. After the signing, Putrid Pile went into strict writing mode.

Writing a total of seven more songs, along with the five songs from the demo, to record the first full length, “Collection Of Butchery” to be released in early 2003. "Collection Of Butchery", is the sickest material that Putrid Pile has done to date with awesome artwork and excellent /professional production.

In 2005 Putrid Pile recorded their sophmore CD entitled "The Pleasure In Suffering" that was released on Gorgiastic Records. This twelve track release recieved rave reviews in magazines such as Metal Maniacs and the like.

Also, many of the tracks have gotten massive airplay and requests on loads of college radio stations across the nation and the world. With some of the classic cuts on the disc being, "Food for the Maggots", "My Inner Demon" and Rush-Hour Killing Spree to blast your eardrums into oblivion.

Who wouldnt be interested?! In May 2009 Putrid Pile released the Junior CD of the band entitled "House Of Dementia" on Sevared Records and is the bands best material to date! With guitar solos and monster riffing, it crushes the senses and grinds your eardrums to a pulp! This album is sure to be one of the best releases of 2009 and a must have for fans of the extreme metal genre. This release also helped the band to get such great endorsement deals from the best companies in the business such as, Jackson Guitars, Spectraflex Original Braided Cables, and Vader Cabinets.

Keep an eye out for this release for it will be sure not to disappoint! In the future, Putrid Pile plans to stay a one-man-band, and continue to progress and keep making quality extreme Death Metal for the masses. Still keeping the original vision in mind, but not turning my back on the idea of change. The new material is a little more technical, then “Collection”, but still has the insane hooks of old and new school Death Metal that fans of the band have come to know and love.