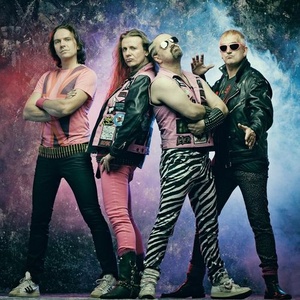 You have a great opportunity to see J.B.O., on June 12, 2021 at Castle Museum Neu-Augustusburg in Weißenfels.

J.B.O. (James Blast Orchester) is a heavy metal band from Erlangen, Germany. J.B.O. was founded in 1989 by Vito C. and Hannes "G.Laber" Holzmann and is known for parodies of rock and pop songs. The band has written more of its own songs since 2000, but continues to produce parodies, which they refer to as Blöedsinn – an intentional misspelling of "Blödsinn," which means "nonsense" or "stupidity" in German.
The original name was "James Blast Orchester" but they shortened this to J.B.O. in June 1996 after James Last threatened legal action.
The Patrizier brewery of Nuremberg earlier threatened to sue J.B.O. for slander. The band have since changed references to "Patrizier Bier" in their lyrics to "Pariser Bier" (Parisian beer / Condom beer).
'Schmitti' and Holmer "a Bier" Graap, two of the founder members, left the band in 2000. They were replaced in 2001 by Ralph Bach and Wolfram Kellner. Kellner previously played in Fiddler's Green, which is alluded to in the song "Arschloch und Spaß dabei" ('Asshole and enjoying it'): "man sagt sogar, dass Wolfram früher Folk-Musik g'macht hätt" ("They even say that Wolfram used to play folk music") .
The Kitzmann brewery of Erlangen supports the band with gimmick products, and has been featured in the band's lyrics.
The band celebrated its fifteenth birthday on July 31, 2004 with the slogan "30 Halbe!" ("30 halves" = 30 half-litre glasses of beer)
The band still tours, especially in Germany, Austria and Switzerland.
"G. Laber" is a pun as it is pronounced the same as "Gelaber", the German for "drivel" or "twaddle".

Zeitzer Str. 4, 06667 Weißenfels, Germany
Weißenfels, Germany
See all rock & metal events in Castle Museum Neu-Augustusburg
You may also like
{"location":"City", "band":"Band name", "genre": "Genres", "place":"Place", "event":"Festivals in"}
{"message":"We use cookies to enhance your experience. By continuing to visit this site you agree to our use of cookies.","info":"More info", "link":"https://en.wikipedia.org/wiki/Cookie" }